I bought this new old stock mattress saddle including original Middlemores plastic bag. (Currently for sale on Ebay, I will remove this mention if it sells)

He studied at universities in America and England, getting various degrees, then had a career as a physicist, poet, novelist, philosopher, historian, art and music historian, and professor..

His poetry books were Songs for a New America (1953), Delta Return (1956), and Five Chambered Heart (1986). His novels were The Married Land (1962) and The Half Gods (1968), he was also script writer for the film The Spirit of Rome (1964), and script advisor for the film Ingenium Romae (1969), both made for Encyclopedia Britannica, and finally his autobiography, Millennial Harvest (2007) while aged ninety. Before that, a major work was Symbolic History Through Sight and Sound, a 60 hour video cultural history of the world, made between 1970 and 1990.

There are currently plenty of videos on YouTube showing sections of Symbolic History Through Sight and Sound, narrated by Charles G. Bell.

Some info on part of the family branch of Barbara Carola Middlemore (1896-1958) daughter of Sir John Middlemore.

In his book, The Married Land, her son in law, Charles Greenleaf Bell, refers to her as Carola Middlemore Mason.

Samuel jr wrote a book on the history of Harford County.

Diana Mason married Charles Greenleaf Bell (1916-2010), they met by chance when she was travelling back from a visit to her cousins in England, he taught at universities, wrote three poetry books, two novels and an autobiography. His first wife was Mildred Mackenzie who he had three daughter with. Diana was his second wife who he was married to for 54 years and referred to by the nickname Danny. Charles and Diana had two daughters, Sandra Bell Colt and Carola Middlemore Bell (1950-2015)

Carola Middlemore Bell was the great-great-granddaughter of saddle company owner William Middlemore. Like her family members, grand-aunt Sarah Dorothea Middlemore and first cousin twice removed, Emily Parker Groom, she was an artist. (If that last relationship definition is wrong just refer to Emily being Sarah’s cousin)

Carola Bell, beloved mother, grandmother, sister, aunt, cousin and friend to many, died August 6, 2015 after a brief illness. She slipped away with peace and grace at her sister’s house, surrounded by the love of her family. She was born in Havre-de-Grace, Maryland on June 14, 1950. She moved with her family to Santa Fe NM, where the people and landscape sustained and enriched her for the rest of her life. Carola was a writer, an artist, and an introspective thinker, who loved poetry, Nature, and late night discussions on life’s fundamental mysteries. She was a spiritual seeker, possessing an inner peace, optimism, and humor that kept her buoyant and inspired those who knew her. She began to paint in 2003, her work was immediately stunning in color and design. Her oil paintings and collages remain testament to her vibrant soul and vision. Carola is survived by her dear children: Taj Birnbaum, Rachel Sumers and Jimi Malone. She also leaves her daughter-in-law Karen Aguilar Mendez, grandsons Ades Aguilar Mendez and Dimitri Birnbaum and her four sisters, Sandy Colt, Nona Estrin, Delia Robinson, Charlotte Samuels of California. She now joins her beloved parents, Charles and Diana Bell. The Heaven’s gain is our great loss. With clear melting dew, I’d try to wash away the dust of this floating world.

I was able to buy one for a nice price that I appreciate, from Ebay member nell4372

These are used to convert a seat clamp diameter to a smaller one to fit a narrower seatpost. See also the brochure earlier on in the blog. 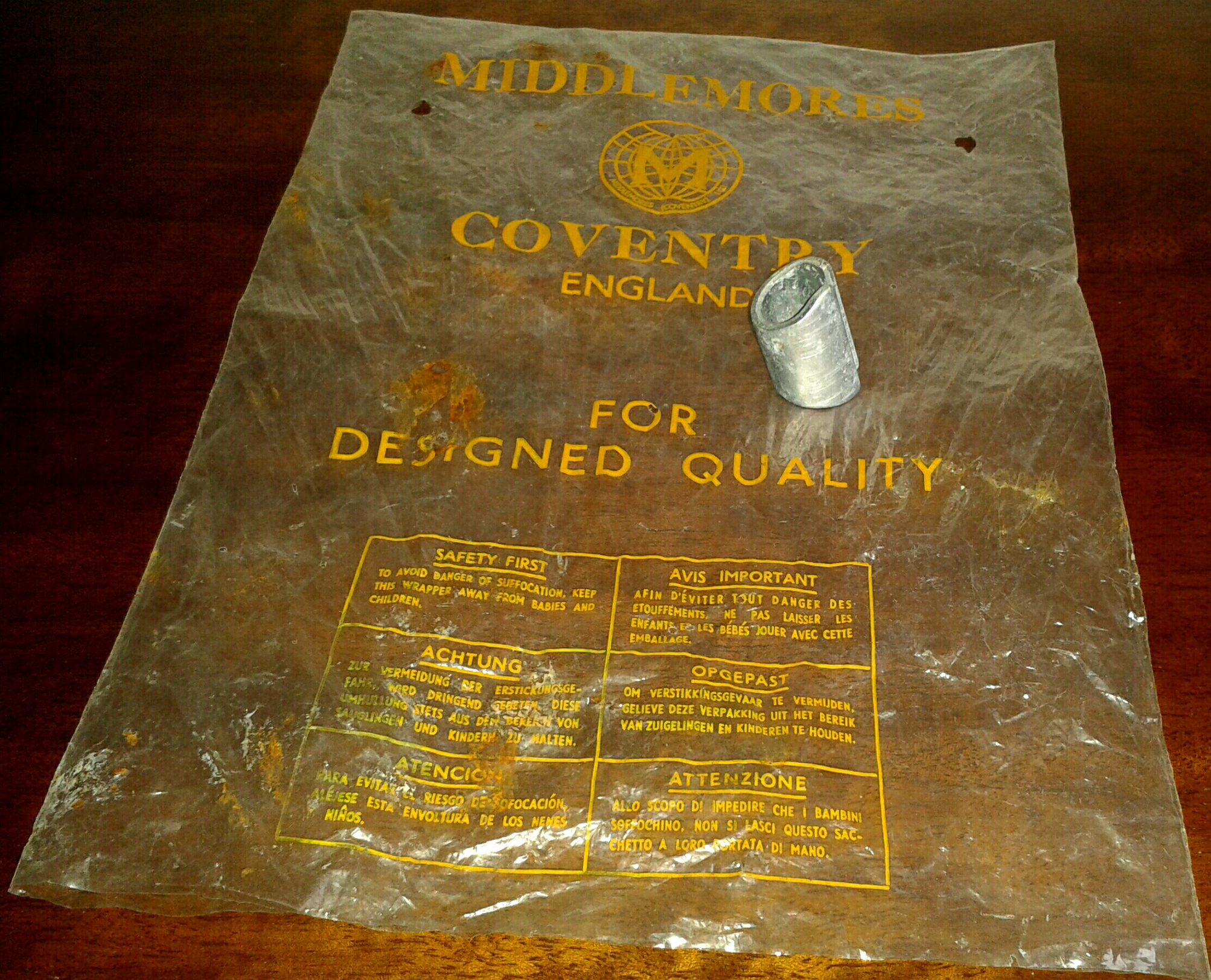 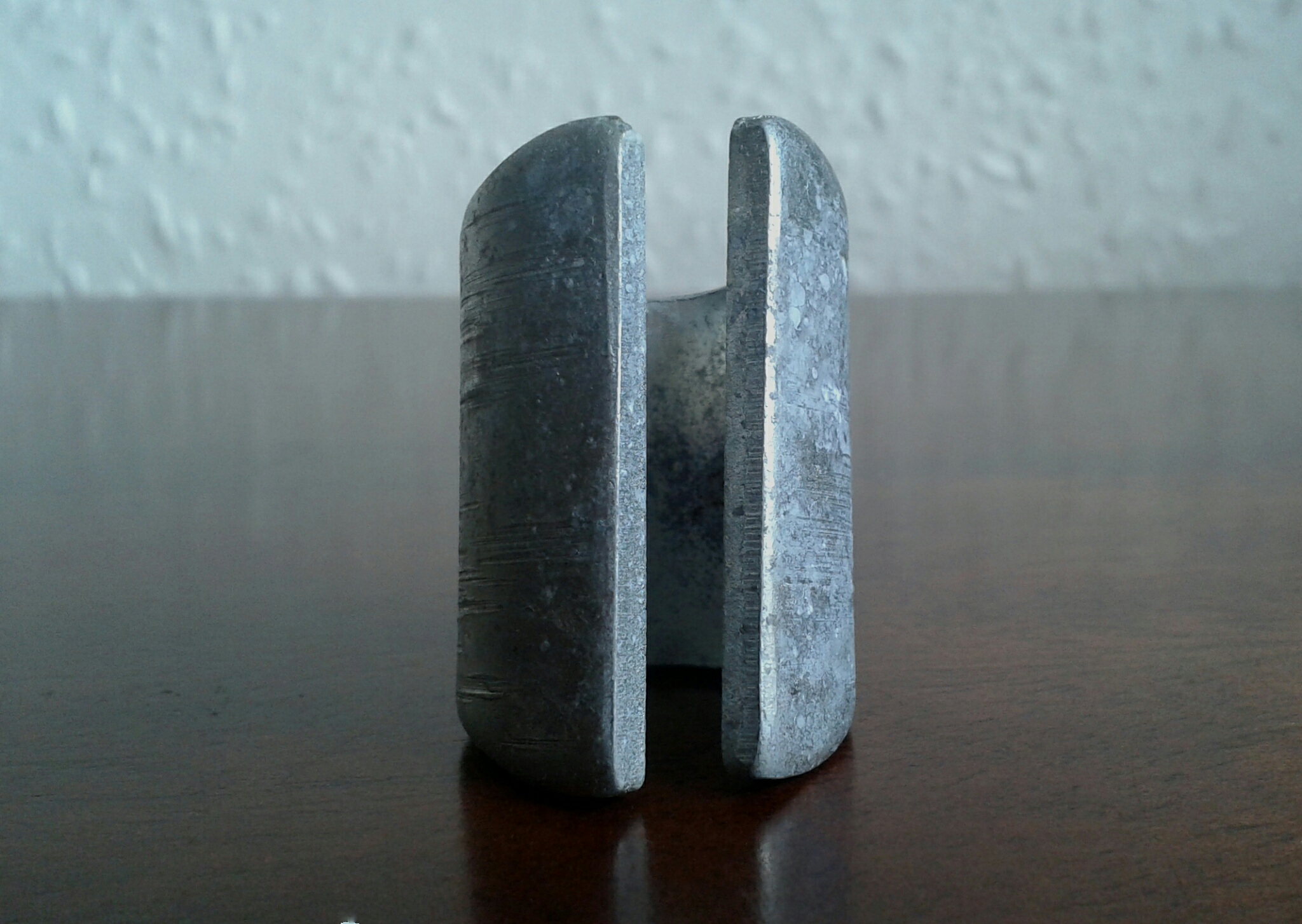 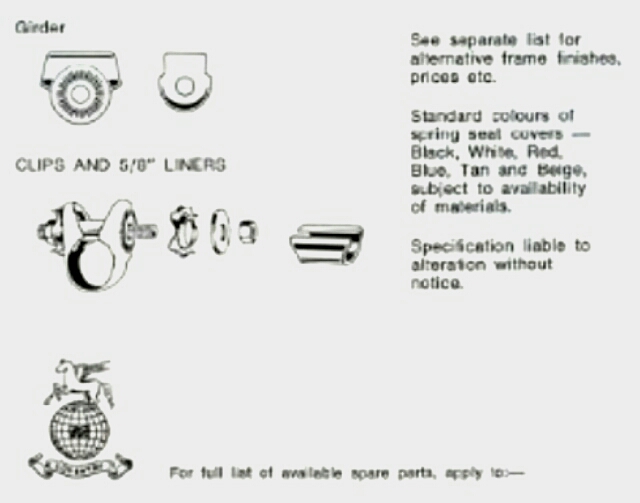 I should  have realised straight away, some paint marks on the lining, so I knew that someone had painted the metal parts black. I removed the black paint to show the chrome rails and nosepiece components which are copper plated steel. These will patinate over time. 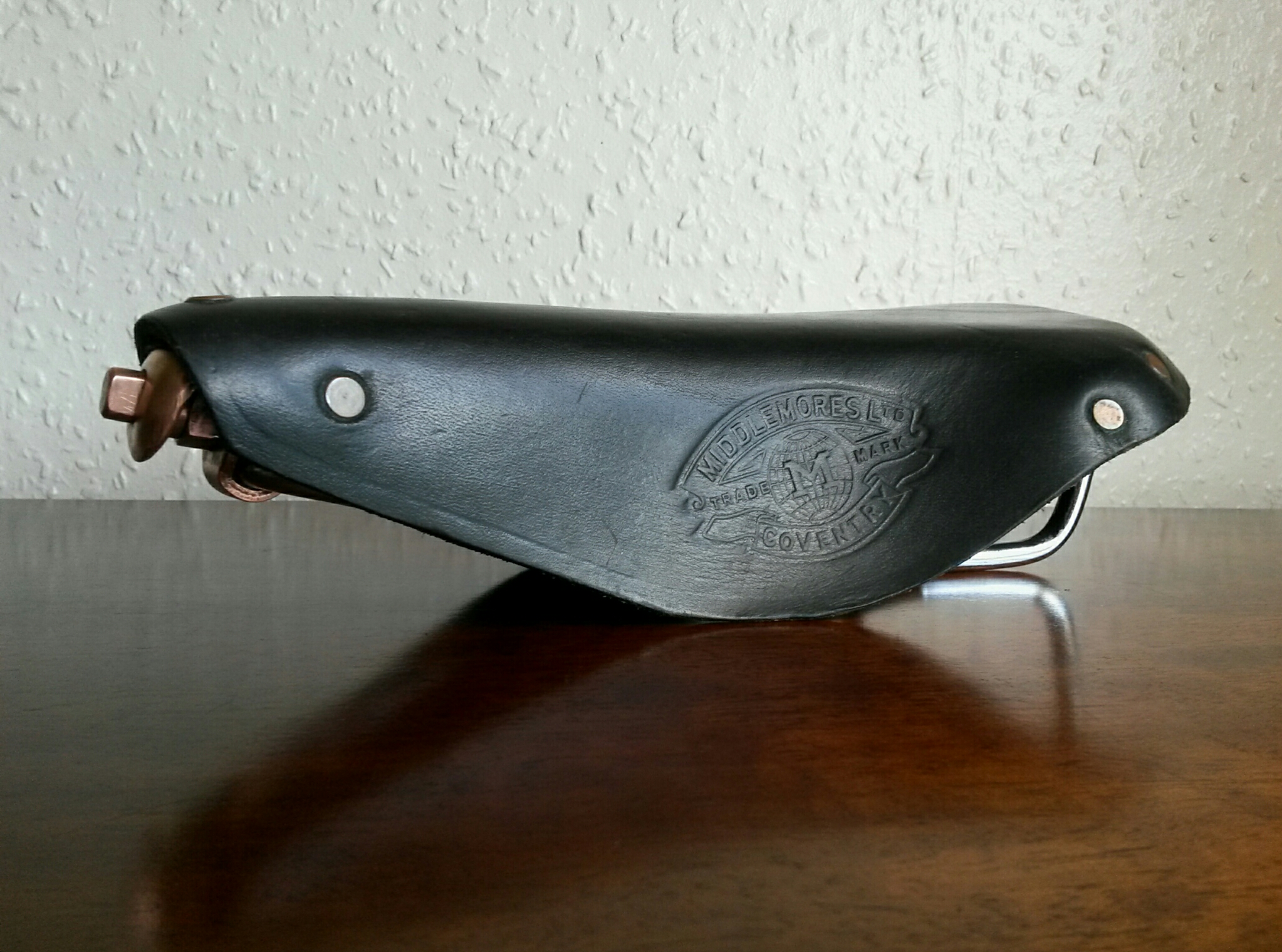 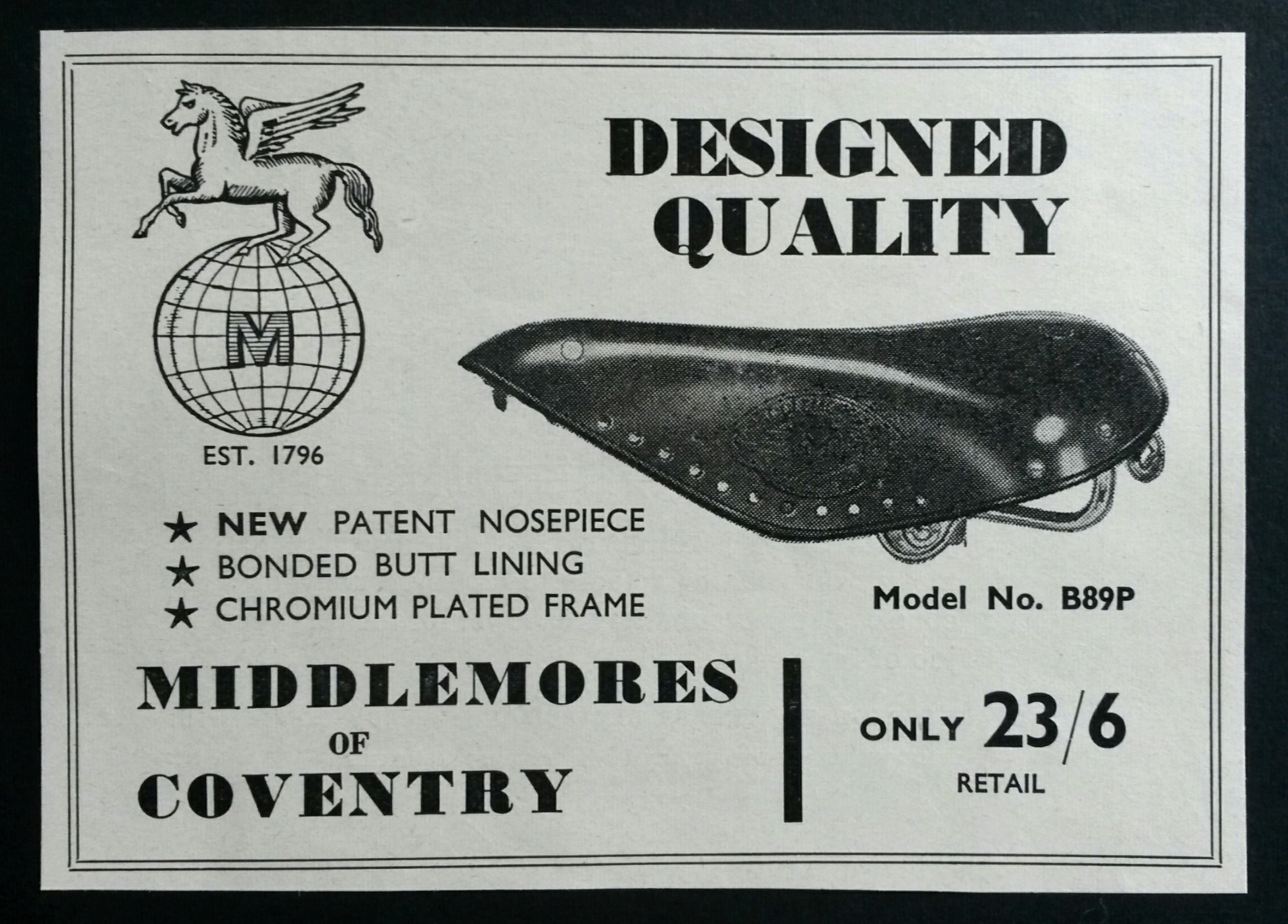 I bought this advert, it was glued onto a thin piece of black card which had “1961” written on the rear, this sounds right as the advert mentions the new patent nosepiece. 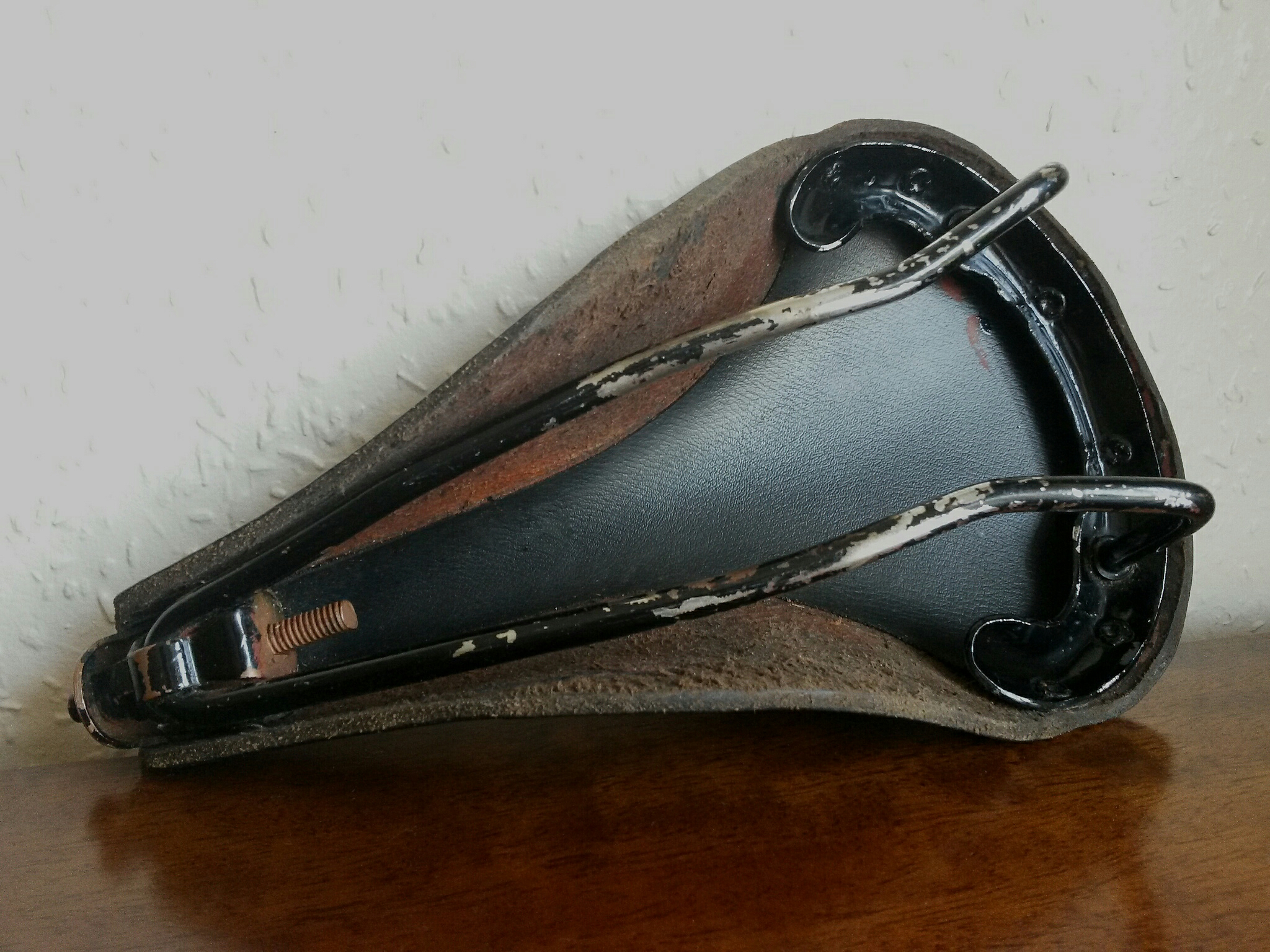 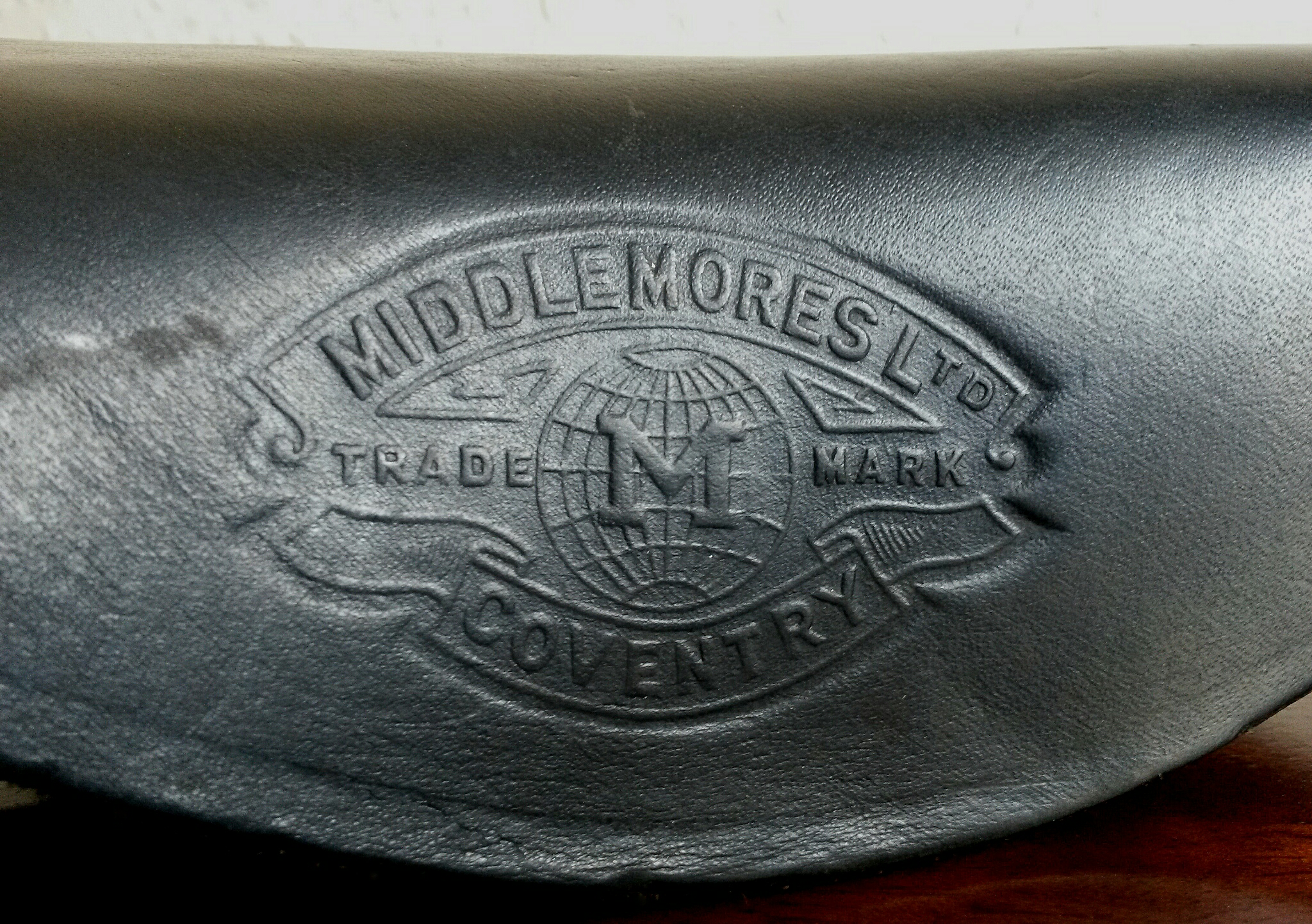 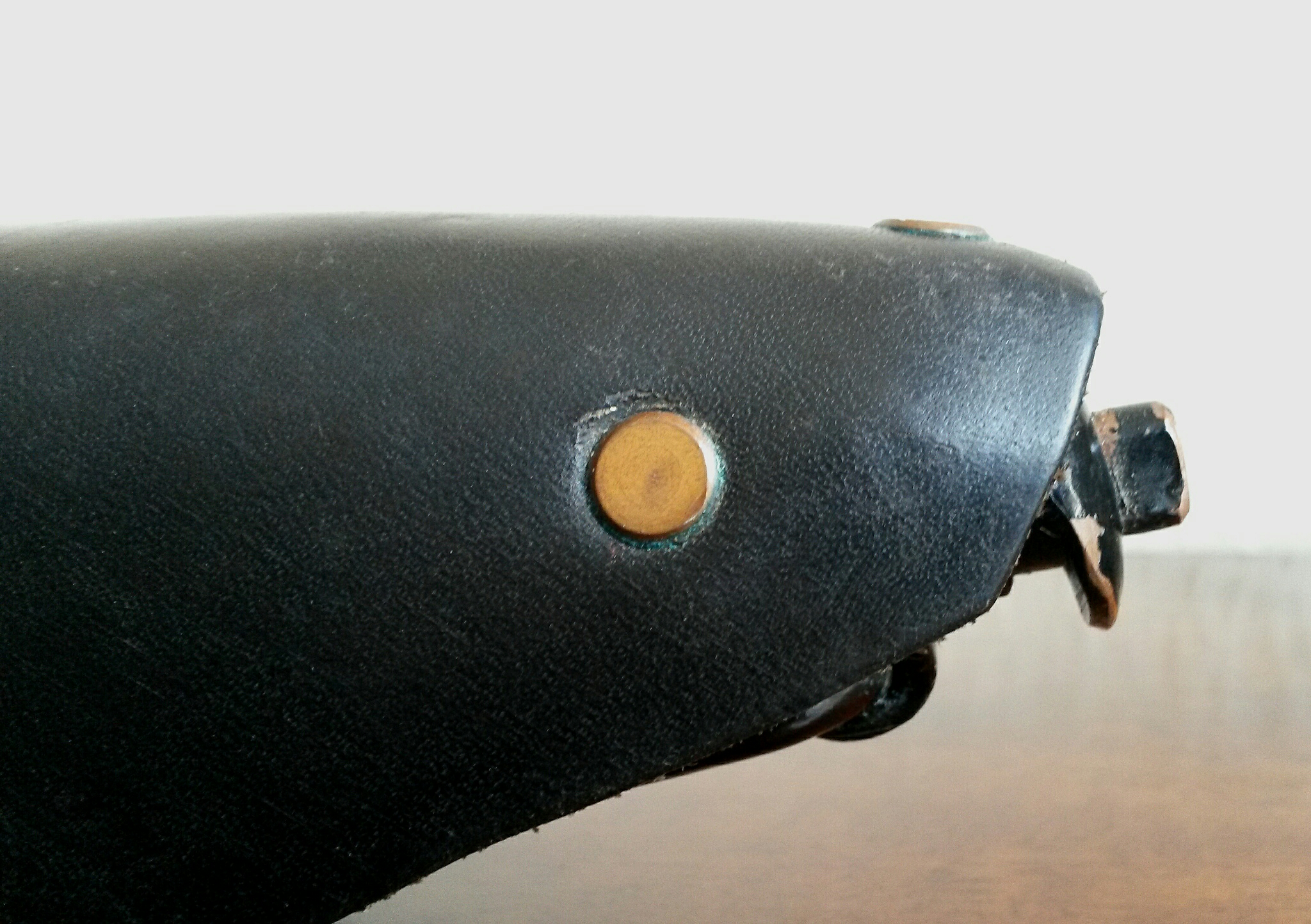 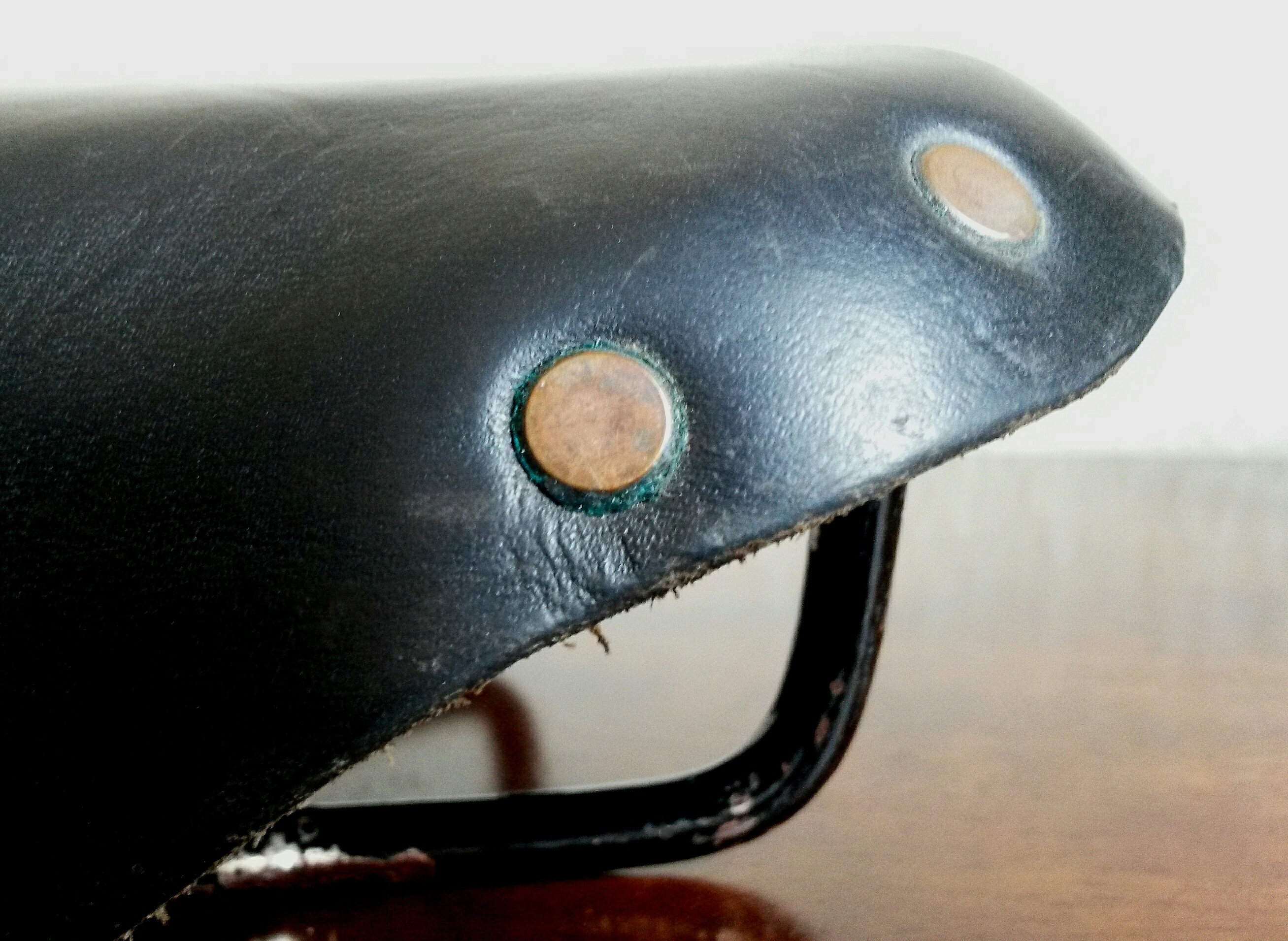 This saddle is a development of the B89, it’s basically the same but with a cutaway nose area and copper rivets. Also it has no bag loops and the leather at the rear has been cut back near to the cantle plate (rear frame), compare this with the rear of the Troxel branded B89 in the previous post. The rails are painted chromed steel and the nosepiece components seem to be painted copper. 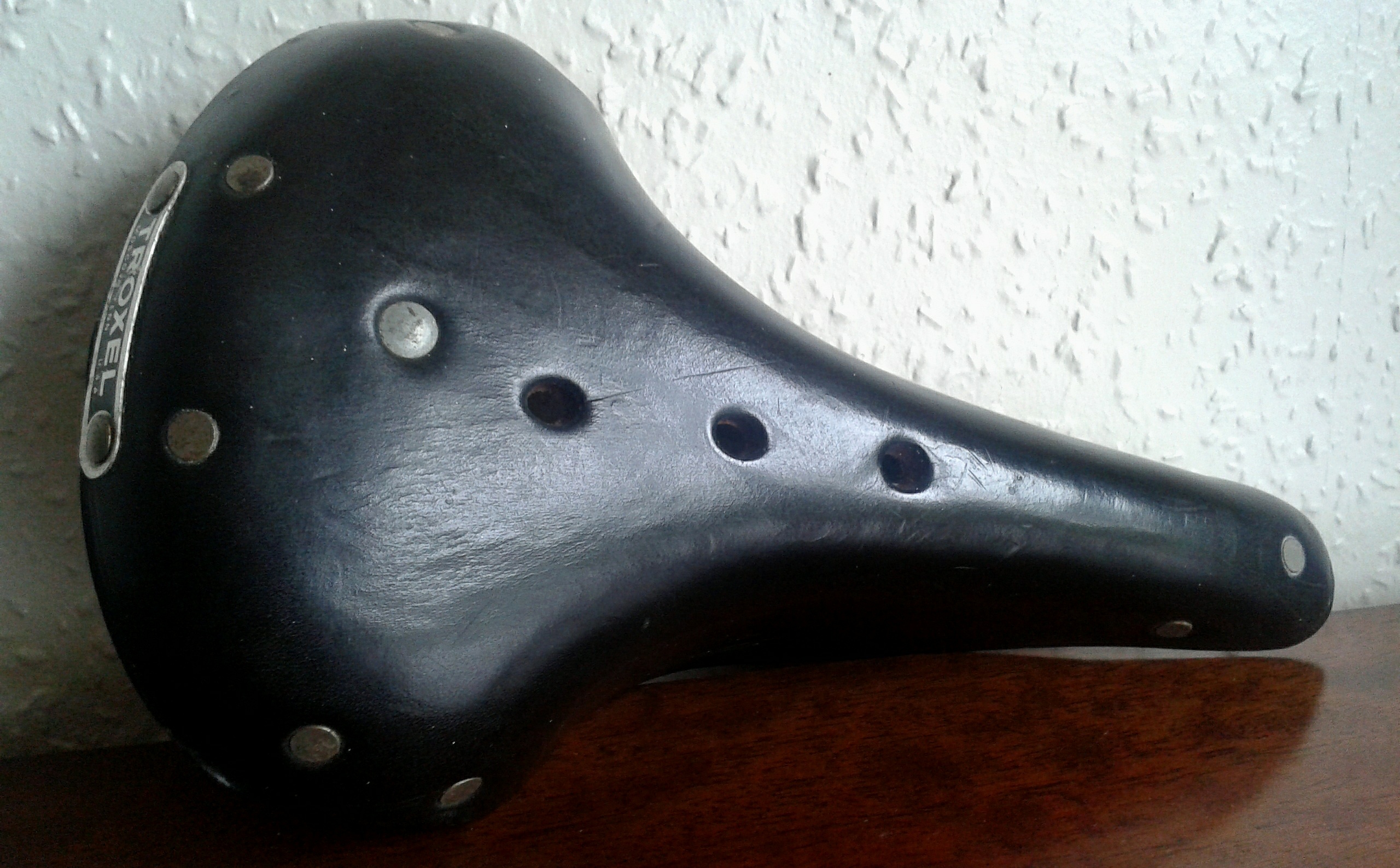 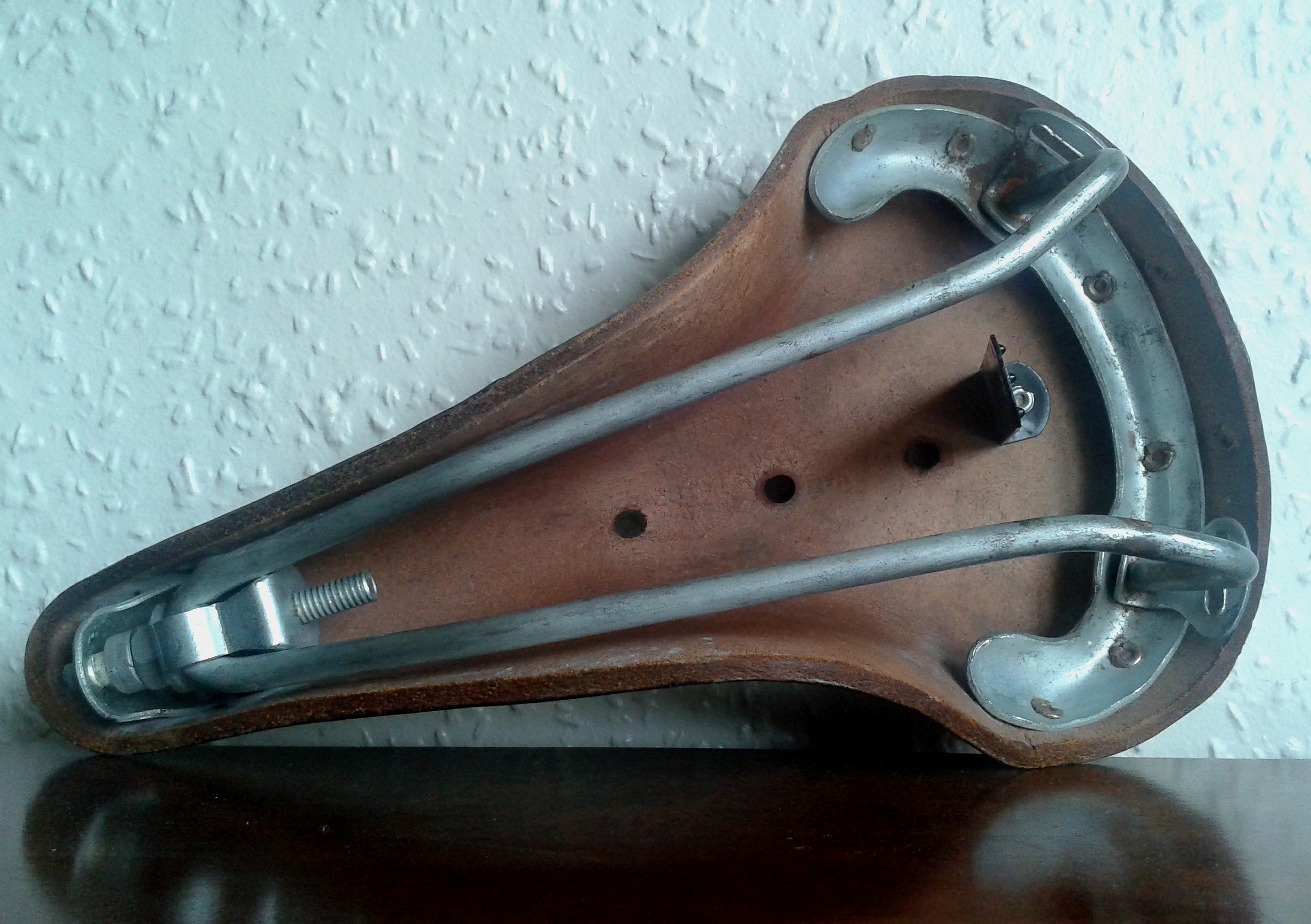 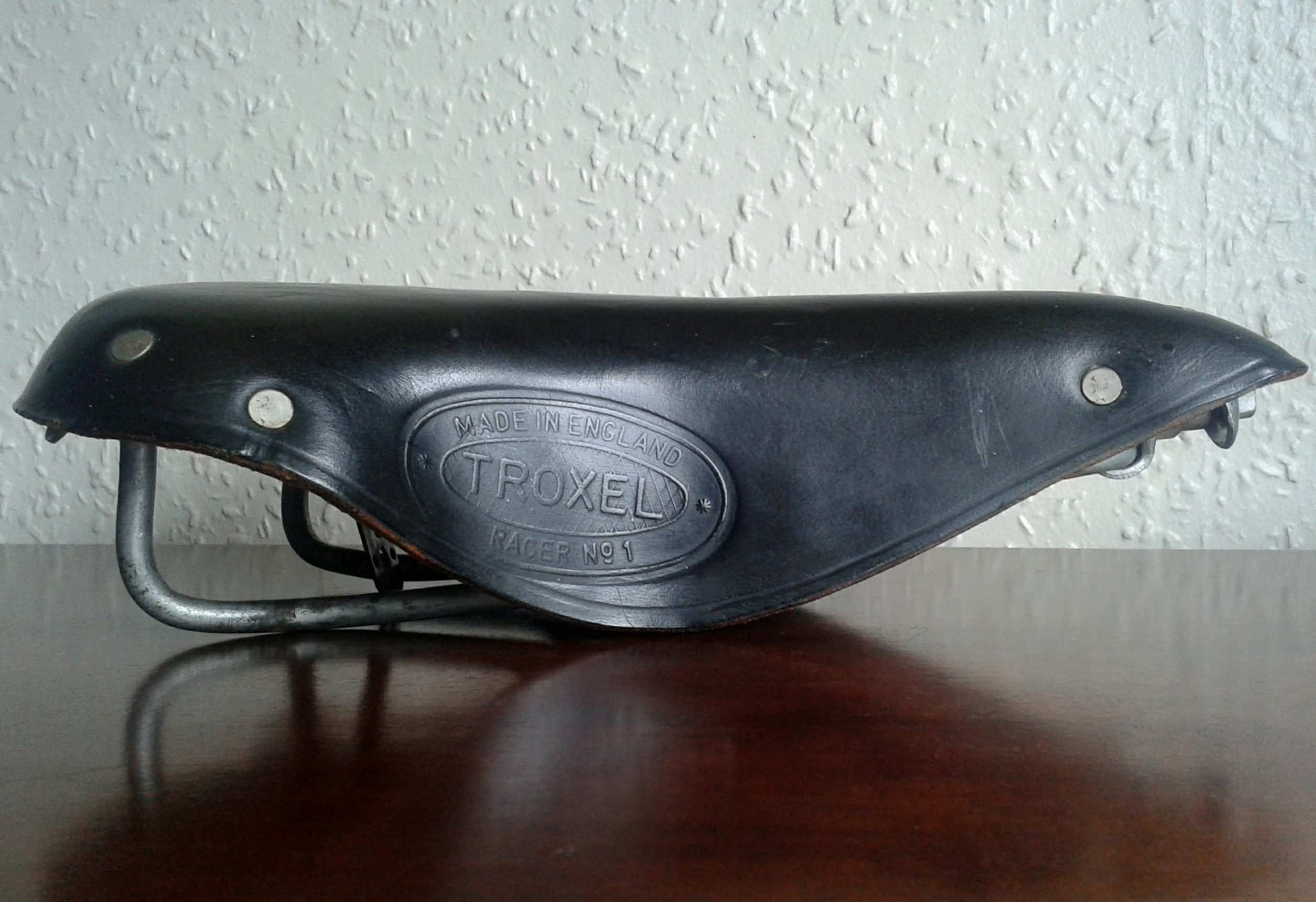 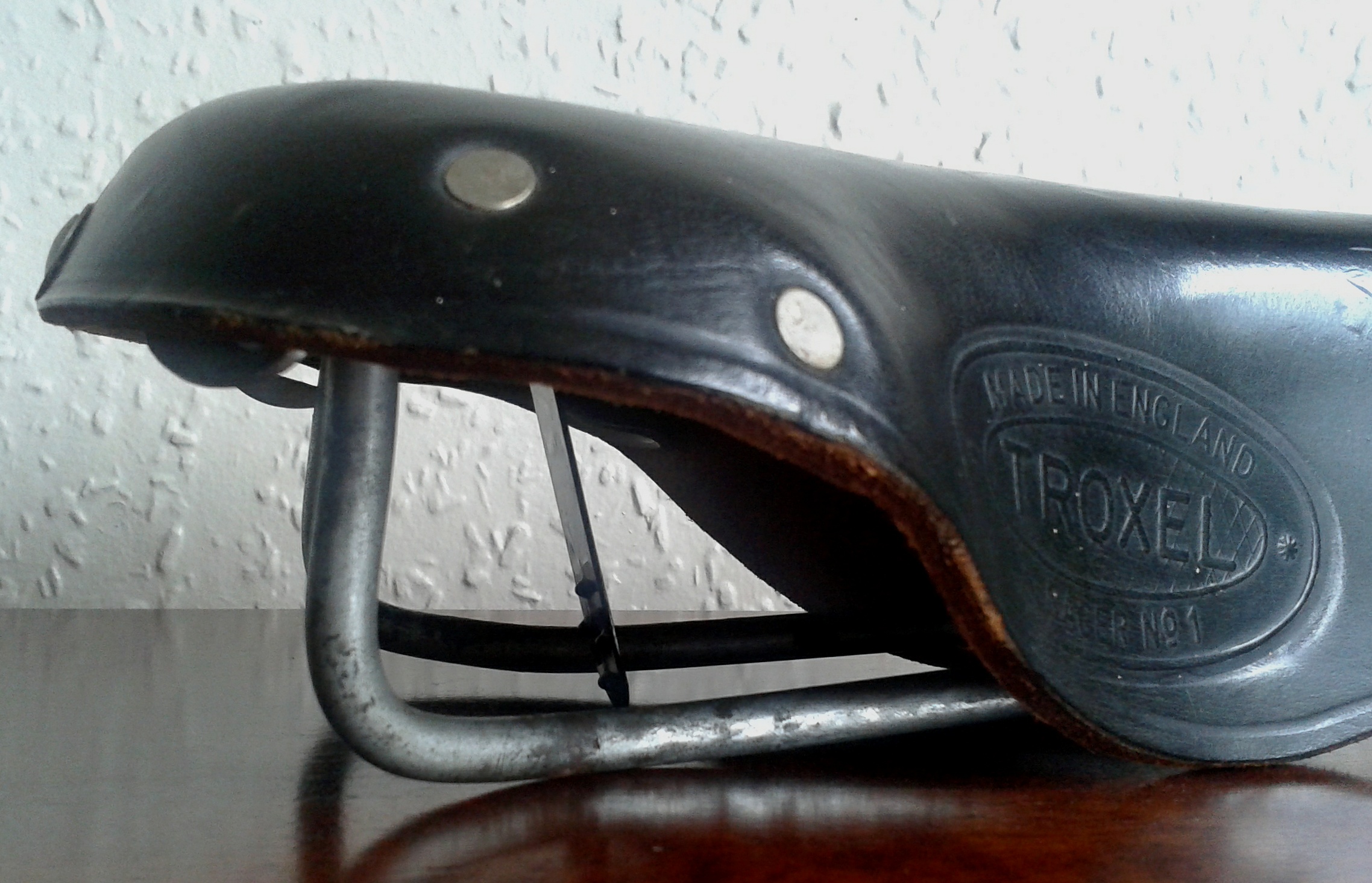 This is one of the lesser known B89 saddles that were made for and branded Troxel, as mentioned earlier in the blog. This one has a bracket for a reflector riveted onto the underside of the leather top. Troxel did this with some of their other saddles, but not all, so probably an optional extra.

This moated house, now known as Hawksley House, came into the Middlemore family around 1424 when Nicholas Middlemore married Agnes Hawkslow who had inherited the house from her grandfather Richard de Hawkslow.
In the Civil War period Charles I came to the house after a siege of the parliamentarians who had seized it for as a base. The Royalists then destroyed the house  – but it was rebuilt.
Early in the 20th century the house and farm land were still in the family with Thomas Middlemore being the owner.
In 1916 Sir Herbert Austin decided to build a village for his factory workers so he bought 120 acres of the farm land off Thomas Middlemore for £7750 for this purpose.
In the 1920s the mother and sister of Austin lived in the house.
The house was demolished in 1957 and on the site are remains of the dried up moat. 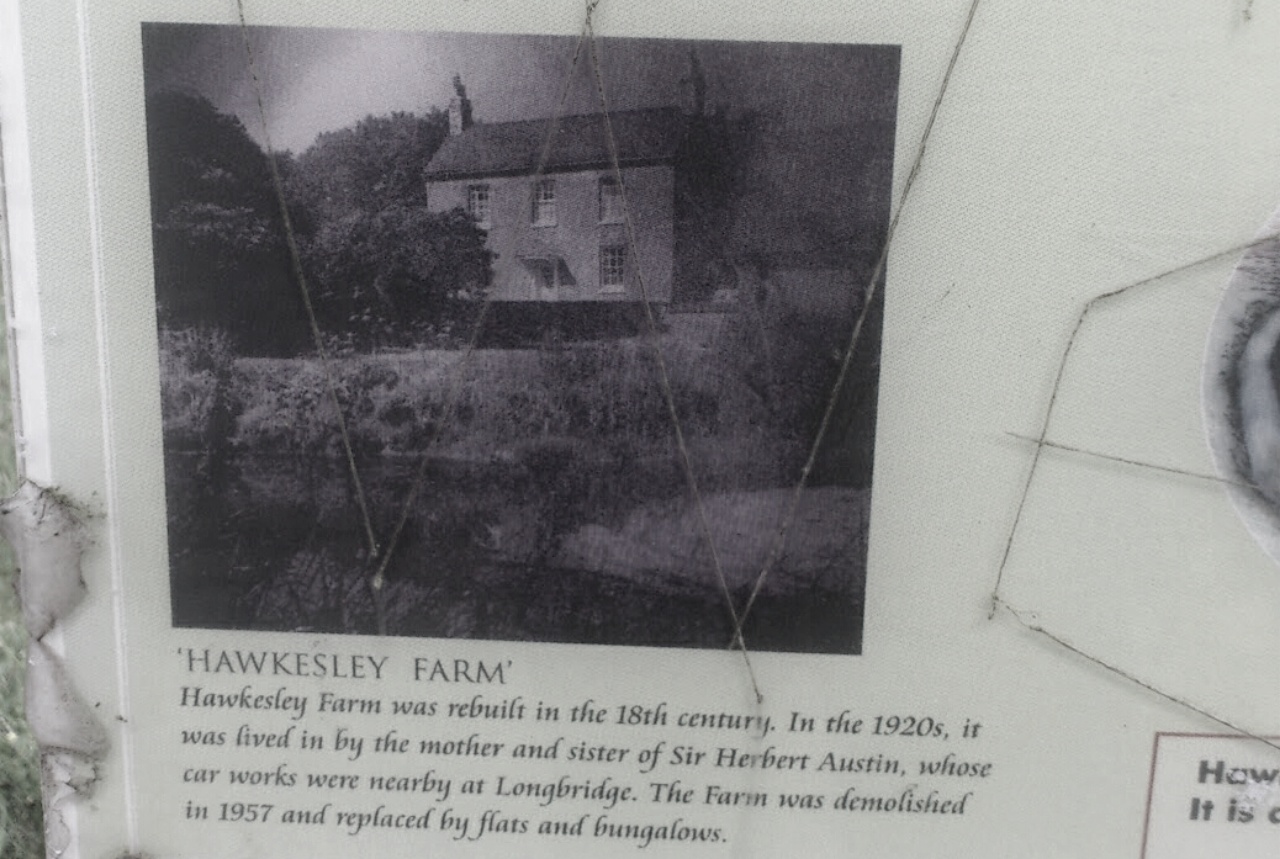 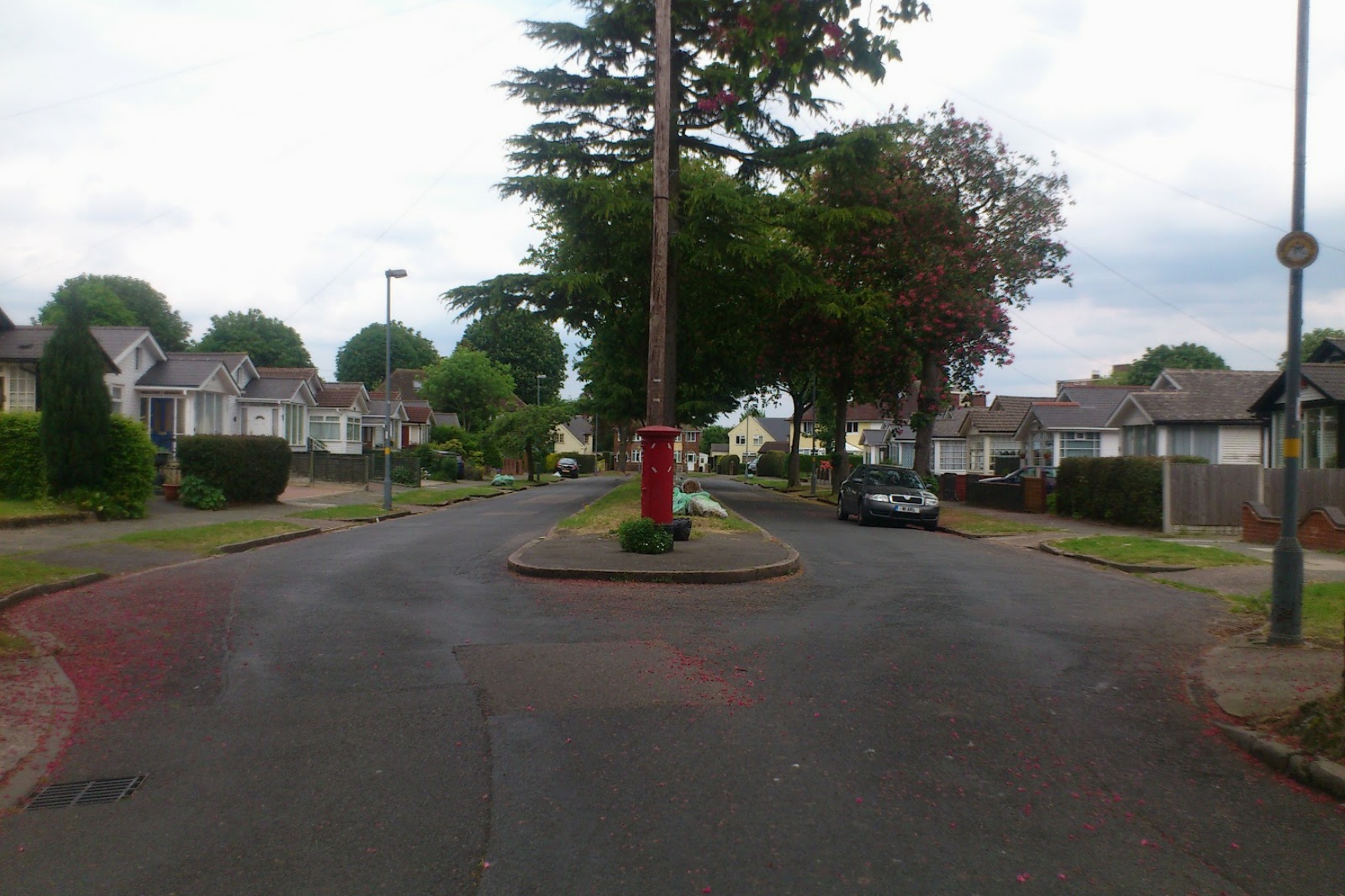